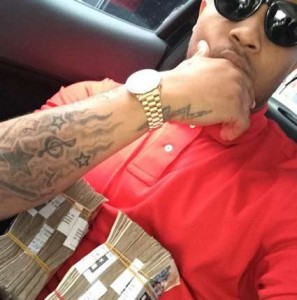 The act has led to more than a few people criticizing him as arrogant and cocky.

In a recent interview, B-Red who is about to drop a song with Davido called ‘Cucumber‘ said he shows off his money because he can do as he pleases.

“It’s not wealth I’m showing off. N500, 000 is not a lot of money. It’s just two thousand pounds. I just landed from America that day and I had no cash so I went to the bank to get some and felt like putting it on my Instagram. What about American artistes, dem dey post cash everyday. Once in a while you can do it. Not like I’m trying to be cocky or something but it’s no big deal” he explained.

B-Red went on to reveal that he has taken a break from school, but will be back in September. After completing his remaining two years he will work in father’s power plant.

As for competition among the HKN Gang, B-Red says he is not competing with his successful cousin Davido, and that his time will come.