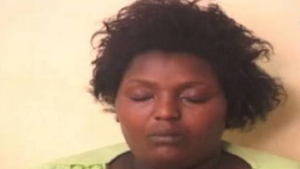 A 20-year-old Kenyan woman, has confessed to killing three children, one of them her one-week old son, removed his intestines and ate them raw. The woman who lives in Korogocho, a slum in Nairobi, is said to have have slit open her one-week-old son’s stomach, removed his intestines and ate them before going to her friend’s house and killing two other children. The friend, Nelius Muthoni, told the police that the vampire woman came to her house in the morning and attacked her by trying to strangle her. Scoop has more:

“She kept asking me why I named my son Peter Kimani and asked if I knew that my mother-in-law had been eating me. She said a lot of things and even said that there were demons inside me. I ran out of the house to seek help from neighbours and when they arrived, they found her holding my 10-days-old son by the neck and under her feet was my 4-year-old daughter. She was stepping on her neck. The neighbours pushed her out of the house and tried to help the children but they were announced dead at a nearby clinic.”

When she was pushed out of the house, the woman is said to have run to the Korogocho Administration Police post where she reported that she had killed her child. A police officer said: “As we were interrogating her, neighbours who learnt that Muthoni’s children had died, also came here. They wanted to beat her but we shielded her.”

A neighbour who was at the police post said the woman did not seem shaken and even asked for a soda at some point. The police have also concluded plans to take her for a medical examination to ascertain her state of mental health.