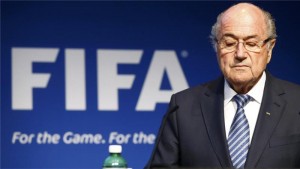 FIFA President Sepp Blatter is being investigated by US authorities as part of their corruption inquiry into football’s governing body. Blatter, who announced on Tuesday that he will be resigning from his position , has not been directly implicated in the parallel US and Swiss criminal investigations into FIFA, which were announced last week. Aljazeera reports:

Unidentified US law enforcement officials, however, told the NYT that “they were hoping to win the cooperation of some of the FIFA officials now under indictment and work their way up the organisation” in a bid to build case against Blatter.

Nine FIFA officials and five business executives were indicted by the US last Wednesday on corruption charges, with seven arrested in Zurich ahead of FIFA’s annual congress on Friday. Blatter announced his decision to resign on Tuesday, just four days after the congress that saw  him win a fifth term as the body’s president.

“I cherish FIFA more than anything and I want to do only what is best for FIFA and for football,” Blatter said at a news conference in Zurich on Tuesday. “FIFA needs a profound overhaul. I have decided to lay down my mandate at an extraordinary elective Congress.