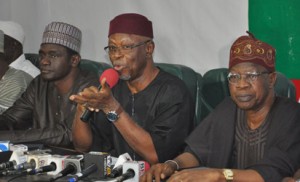 The National Chairman of the All Progressives Congress (APC), Chief Odigie Oyegun, says the Boko Haram insurgents will be in for surprises for daring the resolve of President Muhammadu Buhari to end the insurgency.

The terrorists have intensified attacks following the swearing in of the new president who now continues the fight from where his predecessor Goodluck Jonathan who was highly criticized for his lackadaisical approach, stopped.

“It is obvious that the insurgents as you call them are trying his resolve and I have a feeling that they will be in for surprises,” Oyegun said while fielding questions from State House correspondents after the party’s National Working Committee’s visit to the president in Abuja on Tuesday. Officials of the party had visited Buhari to pay their respect and pledge support for his administration.

“Very straight forward. I led my colleagues in the National Working Committee of the All Progressives Congress to come and pay their respect to the President.

“We had not done so before now, because we wanted the events to move to the ultimate climax which is his installation as the President and Commander-in-Chief and that has occurred.

“So, we just came here to felicitate with him and pledge our loyalty and determination to work with him through thick and thin.

“That he can always depend on the party that he used as a platform to become the President of this great nation.

“We noted the fact that expectations are extremely high and that the public expects a totally new dawn.

“And on that score, we said that we are with you; You Mr President you will succeed because the entire party will be galvanised as one man behind you to ensure that days into this presidency, Nigerians do in fact see that things are changing.

“All the problems will not be solved in one day. There is no switch that you will flick to bring that kind of eventuality.

“But what Nigerians want is to be sure that we have gotten it right and that we are on the proper path toward answering their long frustration towards ameliorating their condition and that is what they will get,” Oyegun said.