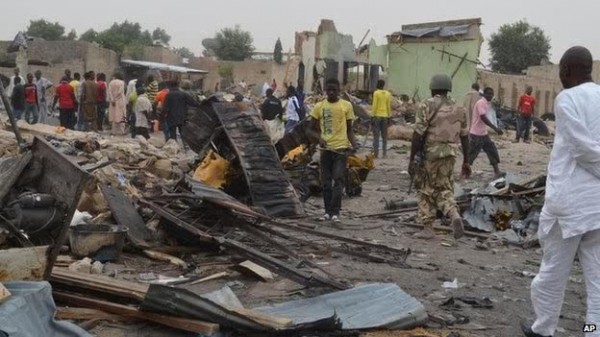 Boko Haram insurgents on Sunday burnt down houses in Babbangida, Tarmuwa Local Government Area of Yobe State during an early morning attack, a resident, who gave her name as Maimunat Abubakar, said.

Babbangida is the headquarters of Tarmuwa Local Government Area of the state and shares border with Damaturu, the Yobe State capital.

This is not the first time the local government headquarters would be coming under attack from Boko Haram.

Abubakar, who fled with two of her children to Damaturu as a result of the attack, lamented that “the insurgents attack our town in the early hours of today (Sunday)”.

Speaking in a telephone conversation with journalists, the escapee said the insurgents had on Saturday attempted to attack the town but their plan was thwarted by the military.

Abubakar said, “Yesterday (Saturday) being the market day, there were apprehensions of a possible attack on the town but security forces were fully aware and such purported attack was thwarted”.

She said residents had taken refuge throughout the night in the bush for fear of being caught unawares by the insurgents. “We were later to see signs of an attack by 6.40 am today (Sunday)”, she said.

Abubakar said she attempted to call some of the people in the town after she fled but could not get connected because the GSM masts had been destroyed.

A military officer, who spoke on the condition of anonymity because he was not authorized to speak to the press, said the attack on Babbangida was a reprisal as a combined team of security forces had on Saturday launched an offensive against the insurgents around Sasawa, a border town between Damaturu and Babbangida.

“We carried out an offensive attack on the militants as a result of a tip off.

“We gathered that they were preparing to attack Damaturu, the state capital and the attack on Tarmuwa may have being carried out as a reprisal to our earlier assault”, he noted.

According to the source, Sunday’s attack on Babbangida is unprecedented and damage to property may be substantial while the number of those killed has yet to be determined because telephone services have been completely disrupted in the area.