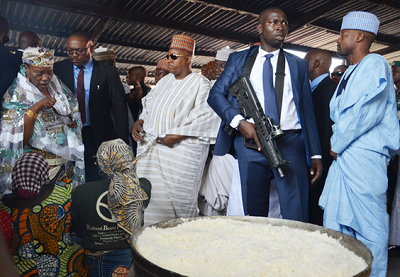 The governor was accompanied by the Shehu of Bama, Alh. Kyari Ibn Ibrahim Elkanemi, and other government officials when he joined over 2,000 IDPs to break the Ramadan fast.

Shettima, who arrived the Yerwa Government Girls College camp of Bama IDPs, at about 6:15pm, first performed the late evening prayers in congregation of the IDPs before settling down to enjoy the breaking of fast with them.

Security was provided by a combined team of policemen and soldiers, who ensured it was a hitch-free session throughout the one hour stay of the governor and the emir.

The atmosphere was however, not devoid of mixed feelings as IDPs shed tears of joy having their governor and monarch coming to share in their plight.

Governor Shettima, who addressed the IDPs after the sumptuous meals said, “We are here in solidarity with our kinsmen. The faces you see here are of people in despair and that of hope of a people who have an indomitable will to bounce back despite the challenges”.

He assured that very soon, the towns that have been liberated will be rebuilt just as he assured the IDPs of President Muhammadu Buhari’s committment to securing the northeast and rebuilding destroyed territories.

Shettima also noted that for the first time, the National Emergency Management Agency (NEMA), which had in the past maintained a lacklustre attitude towards assisting the state, has improved in their assistance.

The Shehu of Bama, who also addressed his people in the local Kanuri language, thanked the governor for visiting his displaced subjects even as he implored the people to use the Ramadan to seek divine intervention so that they can quickly return to their homes.