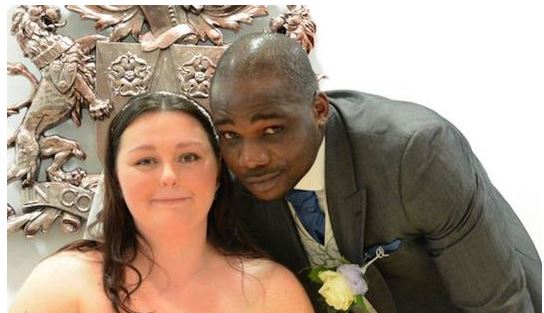 According to a report by UK Mirror, a heavily pregnant British woman named Robyn Daodu has started an online petition to stop her Nigerian Olympic boxer husband from being deported from the UK after he was turned down by the British Army.

Adedayo Victor Daodu came to the UK for the London 2012 Games as a member of the Nigerian boxing squad and decided to stay. The 25-year-old was locked up last week at Dungavel immigration removal centre in South Lanarkshire, Scotland, and told he faces being returned to Lagos. 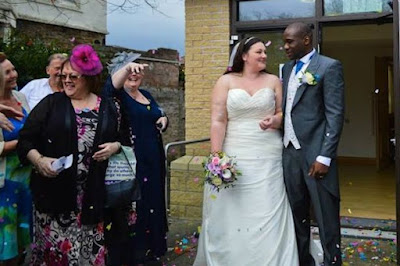 Before the 2012 Olympics, Victor signed up for the British Army. After returning to his homeland, he was sent a letter inviting him to return to the UK for recruitment.

After claiming to have passed written and physical tests, he applied to extend his visa so he could stay in Britain before enlisting. The couple moved to Salford in July 2013. 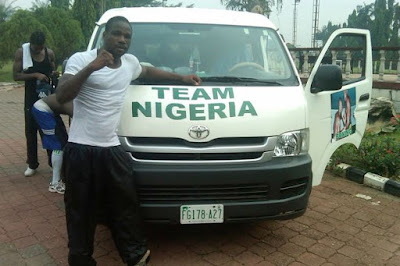 But Victor was soon told that due to new guidelines, his application to join the Army had been refused.

Robyn and Victor applied for asylum in a bid to stay together and claim they were told by the Home Office they could get married pending the application.
They assumed Victor’s UK residency would not be a problem.

After marrying in April last year, his asylum claim was refused in three months later.
The couple say the Home Office, in a letter to their solicitors, have told them they should move to Nigeria.
Robyn says they have spent £4,000 in legal fees after a number of failed appeals. Victor was most recently refused leave to stay in March.
In April, he spent two weeks in the immigration centre, but was released after an appeal.

Oldham East and Saddleworth MP, Debbie Abrahams, was able to help get Victor released from the centre last Thursday.
The couple are now awaiting a reply to another appeal.
Immigration rules mean that anyone applying for a visa as the spouse of a British citizen had to have the legal right to be here for at least the next six months when they got married.
They also have to be able to prove they can support themselves financially.
Robyn, 27, who lives with Victor in Oldham, said: “It took the army a year to tell him he couldn’t join.
“The Home Office should have told him he couldn’t stay a long time ago if that’s what was always going to happen.
“I don’t understand why they’ve only started detaining him now after we’ve set up a life, got married and I’ve become pregnant.
“The communication just hasn’t been there.
“The stress is unbearable. None of this would have happened if not for the army’s slowness in letting Victor know about the change in the acceptance rules.
“I need him and his unborn child needs him.”
Victor said: “I just want to stay here and do what’s right for my baby and Robyn.”
The Home Office said it did not comment on individual cases.