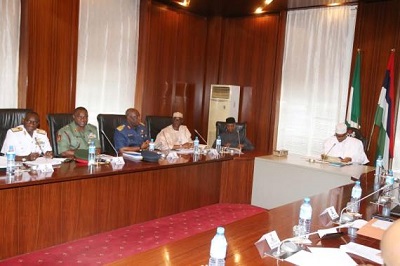 On his first official working day inside his office at the Aso Rock Presidential Villa, Abuja, on Monday, President Muhammadu Buhari ordered the withdrawal of military personnel from check points nationwide.

He gave the directive after a meeting with the service chiefs, which lasted over three hours.

Buhari further directed that policemen should instead take control of checkpoints wherever they exist.

Briefing State House Correspondents shortly after the meeting, the Permanent Secretary in the Ministry Of Defence, Mr. Aliyu Ismail, said that the Chief of Army Staff, Lt.-Gen Kenneth Minimah, was expected to effect the order immediately.

He also disclosed that the service chiefs briefed Buhari about their efforts to move the Military Command and Control Centre to Maiduguri, Borno State.

Meanwhile, a female suicide bomber has reportedly blown herself up at a fish market in the Baga area of Maiduguri.

The explosion is said to have occurred at about 4pm on Monday and is believed to have left an unspecified number of persons dead.

A local trader, who gave his name as Usman Kaka, told Sahara Reporters that “many people have died and there are blood stains everywhere, I saw dead bodies in a police van”.