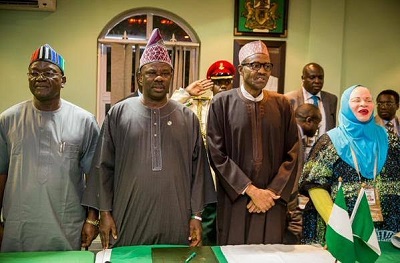 President Muhammadu Buhari has pledged to implement the cardinal policies of his administration in order to move the country forward.

Buhari made the pledge in Johannesburg, South Africa, when he met Nigerians resident in South Africa.

He said government was determined to secure the country, improve the economy and eliminate corruption.

“Government is determined to secure the country, manage the economy, create employment and fight corruption.

“Some articulate writers have said if we do not kill corruption in Nigeria, corruption will kill Nigeria.

“This APC administration intends to kill corruption in Nigeria. We will do our best, I assure you”, Buhari said.

The presidents said the G7 leaders had expressed commitment to helping Nigeria tackle insecurity as well as develop its oil and gas sectors.

“We are getting the facts and logistics requirements together”, he said.

He also said the leaders of the Lake Chad Basin Commission had set up a military command headquarters in Chad with a Nigerian general heading it.

Buhari, however, urged Nigerians resident in South Africa to be good ambassadors of the country.

“Those of you who have the opportunity to come here and represent us, make sure that you are representing Nigeria, you are all ambassadors of Nigeria.

“This means a lot of patience, restraint and self-respect and pride. You must have all these”, he said.

According to Buhari, Nigerian and South African leaders will soon meet to discuss several issues bordering on their relationship.

The Consul General of Nigeria in South Africa, Amb. Uche Ajulu-Okeke, said shops and other property worth millions of Rand belonging to Nigerians were lost during the recent xenophobic attacks.

She also said 143 Nigerians were killed in South Africa between 2011 and 2014, adding that another 81 were in Johannesburg prison.

The President of Nigerian Union in South Africa, Mr Ikechukwu Anyene, congratulated the president on his election and inauguration.

“Your victory is victory over poverty, hunger and signals hope for the common man”, he said.

He urged the president to facilitate compensation for Nigerians affected by the xenophobic attacks.