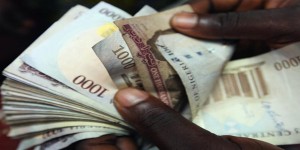 About half of the 36 States in Nigeria, Africa’s largest economy, are broke. Some of them owe workers up to seven months salaries. They have exhausted all available options, including loans. Now they want the federal government to bail them out of the cash crunch caused by reduced allocation.

Governors of Nigeria’s 36 states met today in Abuja, the capital city, to discuss what seems the only way out for them – a financial bailout, at least to pay salaries.

One of the governors, Rochas Okorocha of Imo, a state in the southeastern part of Nigeria, told journalists yesterday that the governors will push for a bailout from the federal government to save the affected States from collapse. Most States in Nigeria depend on monthly allocations from the federal government. However, this has dropped by 30 percent since oil prices began to fall last year. Oil accounts for about 75 percent of Nigeria’s revenue.

Some governors have blamed the reduced allocation for their inability to pay salaries, and are seeking a bailout to meet their primary duties. Locals, however, are opposing the move. “President-elect should not give any kobo in the name of special bailout or intervention to states to pay salaries when he takes over. It is unfortunate and uncalled for that governors most of whom operate in their states flamboyantly and mismanage their states resources to say they cannot pay salaries and shamelessly the President-elect to bail them out. Is it the same people calling for change that are asking to be helped to pay salaries?” former National Chairman of the Labour Party, Alhaji Abdukadir Abdulsalam had said before the inauguration of President Muhammadu Buhari.

Ben Murray-Bruce, a Senator from oil-rich Bayelsa State, one of the states that are not owing their workers, had also expressed his displeasure.

I am deeply sad some state workers have not been paid for over 10 months. I think FG should pay them and collect the money back at source.

Despite the cash crunch, some states in the country have been able to pay wages. According to a report by the Nigeria Labour Congress (NLC) Task Force on employees salary arrears, Anambra, Adamawa, Bayelsa, Borno, Delta, Edo, the FCT, Gombe, Kaduna, Kwara, Lagos, Nasarawa, Niger, Sokoto and Taraba States do not owe their workers.

Nigerian states seem to be united in their expected demand for a bailout, but the ability of some states to continue to pay their workers amid reduced allocation shows they have pursued prudent fiscal policies. States unable to pay workers’ salaries might have been profligate in their spending, with crippling amounts of debts accumulated, making it impossible to turn to banks for loans. But the recent financial struggles of US City, Detroit, offer Nigeria a clue to navigating this challenge.

On July 18, 2013, Detroit became the largest US city ever to file for bankruptcy. It owed $18 billion, primarily due to two causes – pension obligations and money owed to bond holders. Others, though not significant, include unpaid taxes. However, the US administration and the private sector provided nearly $300 million, only a fraction of what the city owed, an action praised by Mark Skidmore, an economist at Michigan State University.

Professor Skidmore said that the US had no plans to help Detroit pay its debt, but to recharge the city after years of hemorrhaging money. “What they are trying to do is enable key investments that are needed to help the city once it emerges from all of these immediate [financial] challenges.”

For Nigerian states looking for a bailout, some of whose fiscal irresponsibility put them in the situation they are, only a stimulus will help. After now, states will be more serious about increasing their internally generated revenue to reduce reliance on federal allocation and move closer to self-sufficiency.