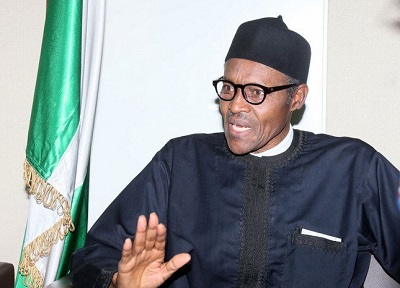 According to him, the non-payment of arrears of salaries had brought untold hardship to thousands of families.

“I would like also, as a former governor myself to remind us the need for neighbouring states to cooperate closely on projects such as interstate and feeder roads, soil erosion, desertification and other developmental programmes,” he said.

“Our country is one and we who have the responsibility to run it lead by example. As far as is possible there should be distance between politics and development programmes.

“On its part the Federal Government will abide by the provisions of Sections 80 and 162 of the Constitution and ensure more accountability, transparency and integrity in the Distribution of the Federation Account.

Speaking on insurgency in the country, President Buhari noted that the Nigerian Armed Forces had shown renewed commitment and made steady progress in the fight against Boko Haram.

“Nigeria, under the auspices of the Lake Chad Basin Commission and the Republic of Benin is collaborating with the Republics of Niger, Chad, Cameroun and Benin to consolidate cross-border and international efforts at eradicating the insurgency.

“I am also happy to reiterate that following my invitation to Germany early this month by the G7 Nations who have shown concern about the Insurgency and promised to intervene to restore the destroyed infrastructure, schools and hospitals amongst others, I have directed the front line states of Borno, Yobe and Adamawa to articulate realistic assessments, costs, locations on Local Government by-Local-Government of affected facilities for submission to the President of the G7 for further verification.

“In addition, the requirements of the Military have been prepared by the Service Chiefs for the consideration of the G7 Nations.

“Let me reiterate the high expectations of the NEC as a veritable source of articulating policies and programmes that are people centred and capable of driving further, the expected growth and development of the country as well as providing environment required for progress,” the president said.