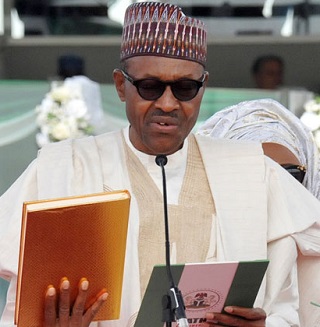 The Catholic Archbishop, Ignatius Kaigama has said that President Muhammadu Buhari’s body language so far shows that he is ready for the positive change Nigeria needed.

Kaigama, the Archbishop of the Catholic Archdiocese of Jos, stated this on Sunday during a mass at the erection of St Michael’s Pastoral Area Pwomol-Heipang to the status of a parish.

The Archbishop, who is the President of Catholic Bishops Conference of Nigeria (CBCN), said that he was highly impressed with Buhari’s inaugural speech.

“Buhari said that he belongs to everybody and belongs to nobody. I think what he is trying to say is that he will not be a sectional leader.

“This is quite positive and we must continue to pray for him to actualise his vision for the country”, he said.

Nigerian President Mohammadu Buhari swears to an oath during his inauguration at the Eagles Square in Abuja, on May 29, 2015. Buhari, 72, defeated Goodluck Jonathan in March 28 elections — the first time in Nigeria’s history that an opposition candidate had beaten a sitting president.

The CBCN president said that the country was in dire need of peace and other needs like water, roads and electricity.

He expressed the hope that the new administration would bring the positive change.

The cleric thanked God for those that served the country in the past including former President Goodluck Jonathan for ensuring peaceful elections and transition in the country.

“We must thank him for not causing trouble because if he had decided to cause trouble, Nigeria would not have been enjoying the peace that is currently being experienced”, he said.

Kagaima appealed to the Plateau people to pray for Gov Simon Lalong who he described as ‘product of divine providence’.

“When Lalong was declared governor of Plateau, he immediately came to me to pray for him and I remember, he told me that his agenda would be peace, unity, reconciliation and social development.

“But without our prayers, he will not succeed because he needs the spiritual and psychological disposition to succeed”, he advised.

He also advised Lalong to intensify his personal, family and congregational prayers for him to succeed in the challenging assignment given to him by God.

The Archbishop, who appealed to Plateau people to be kind to Lalong’s administration, however, advised the people to give him some space to enable him operate maximally as governor.

“Give him some space, give him freedom and if you must ask for something, ask him; what can we do for plateau and not what he can do for you.

“Sadly, what is in the heart of many is what we can get from his administration.

“Give him the space so that the small cake can reach the poorest of the poor in the rural communities because some of you that are here are rich in one way or the other”.

Rev Fr Polycarp Lubo, Parish Priest of the new parish (St Michaels), thanked the archbishop and all the dignitaries that graced the erection of the pastoral area to a parish. (NAN)