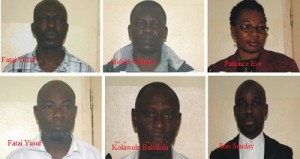 The Central Bank of Nigeria (CBN) has dismissed six of its staff that were involved in the N8 billion currency fraud in some of its branches, the apex bank said today.

“The Central Bank of Nigeria will like to inform the general public of the chronology of events that led the Management of the CBN to hand over some unscrupulous staff to the Economic and Financial Crimes Commission for prosecution,” a statement by the CBN Director, Corporate Communications Department, Ibrahim Mu’azu said.

“During a routine internal audit of the Bank’s Cash Destruction activities in September 2014, the CBN Briquetting Panel, comprising senior bank staff from different branches, noticed some anomalies at the Ibadan Branch, and immediately reported this to the bank’s management.

“On further investigation ordered by the Governor, it was discovered that a systematic scheme, which has been on for several years, was being run in which mutilated higher denomination notes, originally meant for destruction, were swapped with lower denomination currencies.

“This practice, known as interleafing, basically labels a box with a higher value than its true content.

“As soon as the Bank’s internal investigations concluded beyond reasonable doubt that some wrongdoing had occurred, the affected members of staff, who are middle-level officers were, depending on gravity of offence, either summarily dismissed or immediately placed on indefinite suspension on October 21, 2014, and all handed over to the EFCC for further investigation and prosecution,” the statement read.