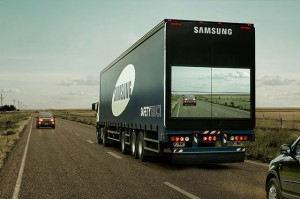 Electronics firm, Samsung is aiming to reduce road fatalities with a “clear” truck featuring a rear-mounted screen to show cars the hazards in front of them. UPI reports:

Samsung Argentina shared a video on YouTube showing the Safety Truck in action on the country’s notoriously hazardous roads with only one lane of traffic going each way.

“In Argentina almost one person dies in a traffic accident every hour,” the text in the video reads, “80 percent happen on roads, mainly from people attempting to overtake.”

The Safety Truck attempts to head off such a situation by allowing motorists to see through the “clear” vehicle — an effect brought about by a built-in wireless camera transmitting the view in front of the truck to a four-panel screen on the rear of the vehicle.