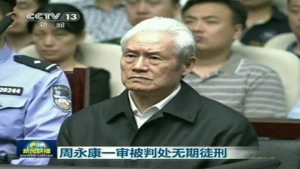 Until his retirement in 2012, Mr Zhou was one of China’s most powerful men. He was put under investigation one year later as part of President Xi Jinping’s major anti-corruption campaign. Mr Zhou pleaded guilty at a closed-door trial in the northern city of Tianjin. According to Xinhua, he said he would not launch an appeal.

The verdict caught many people off guard. It was expected that Zhou Yongkang’s trial would be played out for the Chinese public; his failings strung out for every citizen to see. In similar high-profile cases, like that of Mr. Zhou’s protege, Bo Xilai, the foreign and Chinese media were given 48 hours’ notice that Bo’s trial would begin. Reporters camped outside the courthouse for days, breathlessly waiting for updates.

In March, the head of China’s Supreme People’s Court had promised that Zhou Yongkang’s trial would be “open in accordance with the law”. The trial was set to take place in the eastern port city of Tianjin. It seemed Zhou was set to follow Bo’s pattern. Like other senior officials convicted of serious crimes, it was expected he would receive a suspended death sentence.