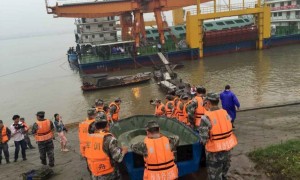 China has pledged that there would be “no cover-up” of an investigation into the sinking of a cruise ship on the Yangtze River, which has left 65 people dead and over 370 missing, as angry families gathered near the rescue site to demand answers. Reuters report:

Authorities are investigating the crew members who were rescued from the Eastern Star, which capsized in a freak tornado on Monday night, and were “gathering evidence”, Xu Chengguang, the spokesman for the Ministry of Transport, said.

“We will never shield mistakes and we’ll absolutely not cover up (anything),” Xu told a news conference on Wednesday night, adding a preliminary investigation had begun. Only 14 survivors, including the captain and chief engineer, have been found since the ship carrying 456 people capsized, in what could be China’s worst shipping disaster in almost 70 years.

Police have detained the captain and chief engineer for questioning. An initial investigation found the ship was not overloaded and had enough life vests on board. The announcement of the investigation came hours before dozens of relatives broke through a police cordon in bid to reach the disaster site.