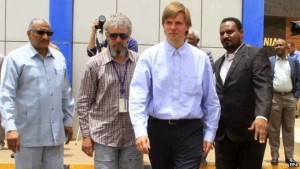 Two Russian pilots taken hostage in Sudan’s Darfur region in January have been freed, Russian officials say. The two men, Sergei Cherepanov and Mikhail Antyufeev, had been captured by an unidentified group in the town of Zalingei in January. BBC has more:

They had been working for UTair, which runs aircraft for the joint UN-African Union peacekeeping mission in Darfur. The two men appeared to be in good health when they met reporters at Khartoum airport. Russian officials said no ransom had been paid to secure their release, which had been achieved without violence.

The kidnappers and their equipment are now “under the control” of the security forces, said Lt Gen Taj al-Sir Othman, a senior officer in Sudan’s security agency.

Darfur has been the scene of a deadly conflict between the government and three rebel movements since 2003. A UTair helicopter with the UN mission in neighbouring South Sudan was shot down last year and three of its crew were killed.