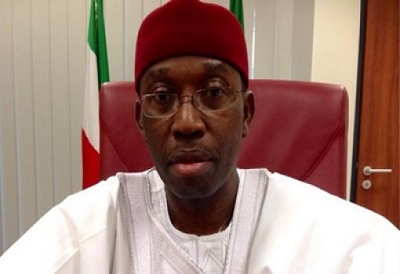 The culture of prostrating or standing up to greet highly placed persons in society will not find a place in the newly inaugurated administration of Governor Ifeanyi Okowa, who has frowned at the practice.

Okowa, who made the plea on Sunday during a Thanksgiving service at St. Philip’s Anglican Church, Asaba, said as an ‘ordinary’ man, he would not want people to kneel before or stand up for him by virtue of his position, so as not to lose the ‘Grace of God’ upon his life.

“Please, brethren, as a Christian, don’t stand up for me in church. When you approach me outside to talk to me, never you kneel before me. This is a plea as a Christian and an order as a governor. I am saying this so that the grace of God upon my life is not taken away from me”, he said.

At the thanksgiving reception, Governor Okowa made his first major appointment of the Secretary to the State Government, a former Deputy Speaker of the Delta State House of Assembly, Festus Movie Agass.

“I want to believe Deltans are happy with the appointment as evidenced by the wild jubilation. I used the occasion to test our thinking of what the cabinet will look like and with this first appointment, I believe we are in the right direction”, he said.

The governor also promised to run a moderate cabinet, taking into consideration the peculiarities of diverse ethnic groups in the state.

“The number of appointees will not be too low or so large. A good number of people who worked for us to be here would be brought into the cabinet, while not losing sight of our cardinal principles of justice, equity and fairness in balancing appointments”, he said.