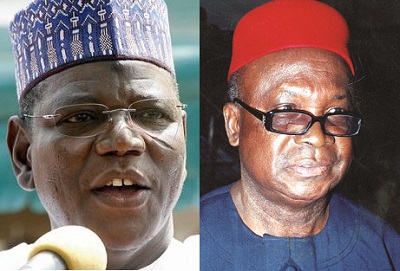 While Lamido is to be grilled on alleged money laundering, Elechi will answer questions bordering on mismanagement of the State/Local Government Joint Account.

Although Lamido’s invitation is dated June 9th, he is expected for quizzing on June 17th.

On the other hand, Elechi, who ought to appear on June 8th, wrote through his counsel that he would not be available until June 16th.

He sent his son, Nnanna, to the EFCC to explain why he could not make it.

A highly-placed source in EFCC, who spoke to The NATION, gave insights into the two ex-governors’ invitation.

The source said: “We are going to quiz Lamido on allegations relating to money laundering. The EFCC had earlier put one of his sons on trial and secured his conviction.

“We invited three of his children over money laundering allegations too. All the transactions having to do with money laundering were allegedly traced to some companies where ex-Governnor Lamido has interest.

“On Elechi, he will face a team of interrogators on alleged mismanagement of funds in the State/Local Government Joint Account.

“We have had outstanding allegations against these former governors but they all pleaded immunity. Now that they are out of power, we can interact with them”.

They were all questioned on alleged “illegal deductions” from the Joint Account for a failed Asphalt Project in 13 Local Government Areas of the state by the Elechi administration. Funds running into billions of naira were allegedly deducted from local government accounts for the failed project.

On January 29, the ex-governor’s son, Nnanna, was also quizzed for alleged money laundering.

Confirming the development, the EFCC spokesperson, Wilson Uwujaren, said “We have invited the two former governors for interaction”.