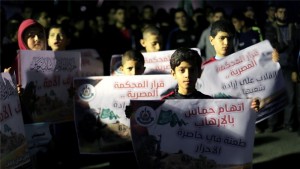 An Egyptian appeals court has cancelled a ruling to list the Palestinian group Hamas as a terrorist organisation, judicial sources have said. Aljazeera was there:

The decision, released on Saturday, comes less than four months after a lower court initially listed it with the designation. Speaking to Al Jazeera, senior Hamas official Ghazi Hamad welcomed the ruling, saying the “terrorist” classification had never been deserved.

“It is a good day. I hope we can now move forward to repair the relationship between Hamas and Egyptian authorities,” he said.

Hamas is an offshoot of the Muslim Brotherhood which Egyptian authorities have also declared a terrorist group and have repressed since the army ousted one of its leaders, Mohamed Morsi, from the presidency in 2013. Cairo has for many years played a central role in engineering ceasefires between neighbouring Israel and Hamas, which controls the besieged Gaza Strip, including a truce reached between the sides in August that ended a 50-day conflict.