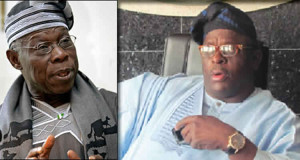 Kashamu had sued the former president for libel over certain allegations Mr. Obasanjo made in his three volume autobiography titled ‘My Watch’, in which he labeled the senator a wanted drug baron in the United States among others.

According to PUNCH, the presiding judge, Justice Valentine Ashi, struck out the suit on May 26, 2015 following the notice of discontinuance of the suit filed by the plaintiff.

Kashamu, who is a Peoples Democratic Party chieftain in his home state of Ogun State, was said to have based his decision to withdraw the suit on “an ongoing settlement talks” with Obasanjo.

But the lawyers, who are representing the former president in the suit, denied knowledge of any such talks.