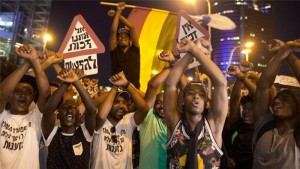 Ethiopian Jews have scuffled with police in Tel Aviv during an unauthorised protest against institutionalized racism in Israel, but there were no serious incidents despite police warnings that violence was planned. About 200 people attended the demonstration on Wednesday alongside a heavy police presence. Aljazeera was there:

Some protesters tried to block roads but were pushed back. At least two people were arrested for defying police instructions, but nobody was injured on either side. Ahead of Wednesday’s demonstration, a police statement said: “Police intelligence has revealed the intention of ‘militants’ on the side of the protesters from the Ethiopian community inciting violence against police, civilians and property.”

The following day President Reuven Rivlin admitted Israel had made mistakes in its treatment of the Ethiopian Jewish community, calling their suffering “an open wound”.