Fans Dissed Harrysong For Wearing Bathroom Slippers In The Studio 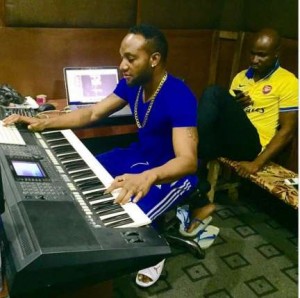 Superstar Pop star, KCee has been up to some mischief in the past few days.

He recently shared a photo of himself and his label mate/songwriter Harrysong in the studio two days ago, June 5, 2015.

The queer thing about the photo is the fact that Harrysong was wearing bathroom slippers popularly known as ‘dunlop’ in the studio.

Many people felt it was a cheap look, and indicated that they expected better from Harrysong, with all the money he has made.

Harrysong hasn’t responded to the comments and it’s quite obvious that he doesn’t care.