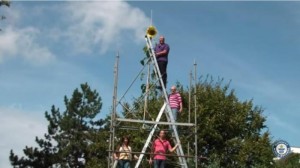 A German gardener broke his own Guinness World Record by growing a sunflower plant measuring 30 feet and 1 inch high. UPI was there:

Hans-Peter Schiffer of Karst first held the record for tallest sunflower plant in 2009 with a 26-foot, 4-inch sunflower and he broke his own record in 2012 with a 27-foot plant.

Schiffer again broke his record in 2013 with a plant measuring 28 feet and 8 inches tall.

“Some sunflowers are already so unbelievable tall, that it could be very possible to get even a taller one,” Schiffer told Guinness World Records. “I am already very happy.”