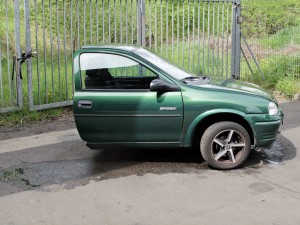 A German man recorded himself cutting shared possessions including a TV, an iPhone and a car in half after a breakup and posted the halved items on eBay. Scoop has more:

The man, who posted the video to YouTube under the name Der Juli, wrote in accompanying text he was splitting his possessions in half after a breakup.

“Thank you for 12 ‘beautiful’ years Laura,” the text in the video reads in German, “you’ve really earned half!”

Der Juli then proceeds to cut through items including an iPhone, chairs, a flatscreen TV, a bed and a car.

“Greetings to my successor!” he wrote in the video’s description.

The man then posted the halved items on eBay with starting prices of a single euro, or $1.14.

The items posted on eBay also include halves of a couch, a bicycle, a cordless phone, a motorcycle helmet, a teddy bear and an Apple laptop computer.