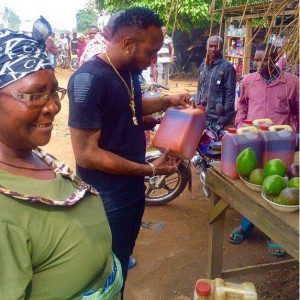 The Limpopo master has again thrilled his fans and critics as he surprised one of his 281,085 followers when he paid a sum of N85K into her account for her school fees.

The excited fan and follower, who is simply identified as Chioma Cynthia Okoli, summed up courage to ask for a financial assistance from the Limpopo singer recently and within few minutes of messaging in the comment section of the singer’s Instagram account, she received an alert.

KCee merely requested for Okoli’s bank details which she gave and after which the transaction was made and the fan has remained thankful to the singer, who is currently in Ibadan for a concert.

This is coming few weeks after the singer took to the street to hawk products from organizations he serves as brand ambassadors.