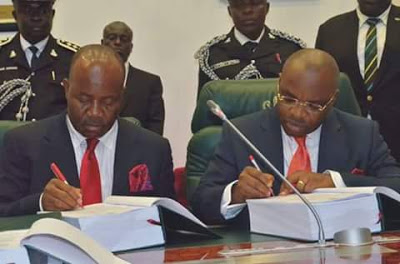 Reports that Governor Udom Emmanuel of Akwa Ibom State is been tele-guided by his predecessor, Godswill Akpabio, has been dismissed as false by a former Commissioner for Information in the state, Mr. Aniekan Umanah.

The All Progressives Congress had in a statement signed by its state chairman, Dr. Amadu Attai, at the weekend, accused Gov. Emmanuel of being controlled from Ukana, Akpabio’s country home.

The APC stated that most of those nominated for key positions by the governor allegedly planned and executed mayhem, murder and rigging during the last general election in the state.

Reacting to the claim in an interactive session with journalists in Uyo, the state capital on Sunday, Umanah said that both Emmanuel and Akpabio were working with other stakeholders to ensure the development of the state.

He said, “There is no feud between Senator Godswill Akpabio and the incumbent governor, Mr. Udom Emmanuel. Emmanuel made it clear during a public event that the enemies of the state should leave him and Akpabio alone.

“So leave Emmanuel and Akpabio alone. There is no feud between these two individuals. The relationship is cordial and, of course, they are working with other stakeholders in the interest and continued development of the state. So the governor is not under any form of pressure from Senator Akpabio”.

Umanah also condemned those criticising the nominees’ list of commissioners sent by Emmanuel to lawmakers in the House of Assembly for approval, saying the governor had followed due process in the selection of those he would be working with.

He urged the people to look at the antecedents of the nominees, seven of whom served under the previous administration, before criticising the governor for a decision taken in the overall best interest of the state.