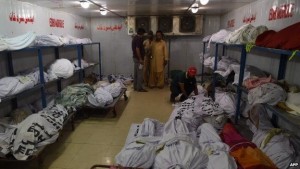 Some 224 people are now believed to have died during a heatwave in Pakistan’s southern Sindh province. Health officials say most of the deaths have been in the largest city, Karachi, which has experienced temperatures as high as 45C (113F) in recent days. BBC reports:

The city has seen power cuts caused by an increased demand for electricity because of the extreme weather. Many of the victims are elderly people who have been suffering from fever, dehydration and gastric problems.  Hundreds of patients suffering from the effects of the heatwave are being treated at government hospitals, provincial health secretary Saeed Mangnejo said.

Local media report that more than 150 bodies have been taken since Saturday to the Edhi morgue in Sohrab Goth, which usually receives about 20 bodies a day. The demand for electricity for air conditioning has coincided with increased power needs over Ramadan, when Muslims fast during daylight hours.

Hot weather is not unusual during summer months in Pakistan, but prolonged power outages seem to have made matters worse, the BBC’s Shahzeb Jillani reports. Sporadic angry protests have taken place in parts of the city, with some people blaming the government and the city’s main power utility, K-Electric, for failing to avoid deaths, our correspondent says.