Home Metro News How My Father Defiled Me Twice To Confirm If I’m A Virgin...
Facebook
Twitter
WhatsApp 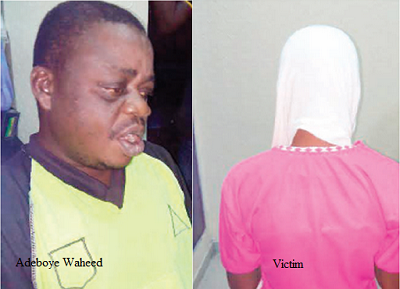 The police in Zone 2, Onikan, Lagos State, has arrested a 48-year-old man, Adeboye Waheed, for defiling his daughter twice.

The 14-year-old girl (name withheld), who lived with her father, step-mom and four other siblings on Adama Araro Street, Ikorodu area of Lagos, fled home when she could no longer cope with incestuous act.

Narrating her ordeal at a near-by Church where she fled to, the SS1 student of Araromi Isoju Grammar School in Ikorodu, said: “My father started checking my private part, to check if I have started mensuration in 2014. On a particular day in November of the same year, I was sleeping on the floor of our one room apartment in the night, he removed my rapper. My step mother was not around that day.

“He used his fingers to touch my private part and asked if I was menstruating. He also asked me if anybody had ever had sex with me, I said no. He said he would use his penis to test me to confirm the truth. That was how he forced his ‘manhood’ on me and covered my mouth not to shout.

“From that time, I started bleeding till morning when I became weak and he did nothing. He warned me not to let anybody know”.

The victim said her father repeated the act on March 5 this year. “I was browsing with someone’s phone in the house when he asked me to remove my clothes. He put on condom and had sex with me.

“I felt very bad inside me but I could do nothing.

“The next day, I packed my belongings and ran away from the house to a near-by church. “I really felt humiliated. Before I left, I threw away all the condoms he bought and dropped a note that he should not look for me.

“At the church, I narrated what happened to me to them and they took the matter to the police”, she narrated.

The culprit, who earlier denied the allegation, recanted later on, asking for forgiveness as he was allegedly under the influence of a strange spirit, hence, did not know what he was doing.

“Please police, journalists forgive me; I don’t know what came over me. I have been beaten thoroughly by Oodua People’s Congress (OPC) boys; that is why my eyes are swollen”, he pleaded.

Speaking on behalf of the zone PPRO, Mr Olorunfemi Shem, said all the investigations carried on the matter and the medical report from a government hospital proved that the allegations against Mr. Waheed was true.

He said: “Our investigation and medical report from a government hospital proved that the girl was defiled by her father”.