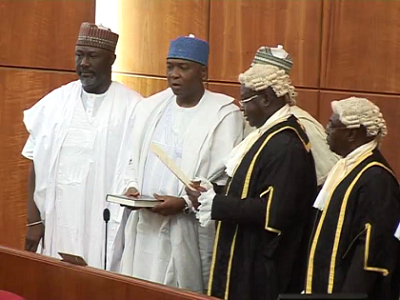 Senior Special Assistant to the President on Media and Publicity, Malam Garba Shehu, said there was a request for the National Assembly to move the time of the inauguration of the Senate for the meeting between the President and the All Progressives Congress (APC) lawmakers to hold.

Shehu, who made the disclosure on Channels TV programme, Sunrise Daily, said President Buhari had to forego the meeting with 51 APC lawmakers at the International Conference Centre (ICC) after he got information that the election process at the National Assembly had begun just as he was about to leave his house for venue of the meeting.

According to Shehu, the point of going to the ICC was lost once the process of election had begun.

Saraki emerged Senate President unopposed on Tuesday in the presence of 57 out of 109 Senators on Tuesday. The others went to honour President Buhari’s invitation.

The former Kwara Governor’s emergence appears to have box the APC to a tight corner as the position of Deputy Senate President went to the minority Peoples Democratic Party’s Ike Ekweremadu.

The governing APC has rejected the outcome in both chambers of the National Assembly and vowed to discipline its members, who disobeyed its directive.

Shehu said: “Well, President Buhari had planned to be there to show support for the party and once the process had begun, the point had been lost. Let me make this clear, I think somebody just wanted to bump into the President because the President had discussed what he wanted with Saraki directly or indirectly. The clerk of the National Assembly was reached directly or indirectly and they would have shown that respect for Mr. President but the process went ahead. And that is it.

“I am talking about the clerk, Saraki, the key characters … had sufficient information directly or indirectly coming to them that the President will be meeting the party members and the party chairman was on the ground. Assumption would have been that every loyal, committed party member would have presented themselves to the party and to their President. That did not happen yesterday.

“The party had begun a process and concluded it and some of these actors were part of that process. They knew what had happened. There was a shadow election of some sort. It is clear that there was nothing accidental in all of this things that happened. The APC as a party had begun a process for choosing leaders. There was a shadow election in which leaders were chosen on the platform of the political party and it was complete. There was no doubt about it.

“A meeting was scheduled for 9 o’clock because the president needed the meeting in order to show solidarity with the party. The president wanted to show that he stood with the party. The process had begun and it was complete and that good party men should respect that process. The President was about stepping out when you guys on television were showing this action live. So the whole point had been missed. There was no point going ahead. Well, understand me correctly, in terms of protocol and all of that, the President would not have moved out of his home if he had not received confirmation that all was set for the meeting. It was nearing 10 o’clock when party leadership said ‘you can now come’”.

Shehu debunked claims that the meeting was secret, adding that the invitation for the meeting was online and all efforts had been made to notify the key people involved in the drama that played out.

He also denied speculations that President Buhari deliberately kept the 51 APC lawmakers at the ICC in order for them not to participate in the election.

The presidential aide, however, reiterated Mr. Buhari’s position to work with whoever is the Senate President, adding that the President will support whatever decision the APC takes.

Shehu also debunked reports that President Buhari had congratulated the Senate President and House of Representatives Speaker, Yakubu Dogara on their victories.

“The President is a democrat. He acknowledged that the process had been complete and he is not the one to interfere in the affairs of the National Assembly. He has to respect the constitution of this country and in essence he is saying ‘I will work with whoever is there, whether they are happy or they are not happy, that is a different thing. He had to obey the laws of this country. The President is a constitutional man. He will abide by the laws of the country and he will work with whoever is there. In this case, he has never committed to any single candidate.

“The point we are making is that the President stands with the party… You have a situation in which constitution says majority of the members of the Senate will be choosing their leaders. 51 senators have not been given the chance to take their own oath. Do you have a complete Senate in that situation?

“The President is a party man. He is not above the party. He is subject to control by the party and, therefore, he has been involved in all of these processes and he is not the one to tear down the party that put him there”.