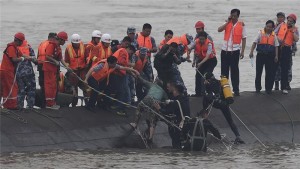 Hundreds of people remain missing after a tourist ship carrying more than 450 people sank on the Yangtze River in central China. Five bodies have been retrieved and at least 15 people rescued, including the captain and the ship’s chief engineer – who have both been detained – according to state media reports. Aljazeera has more:

Hours after the incident, which occurred on Monday night local time, the People’s Daily reported that more passengers were still alive and inside the Eastern Star. Images shown on state broadcaster CCTV showed rescuers lying on the upturned ship attempting to communicate with potential survivors inside.

The China Daily newspaper reported that a woman in her 60s was pulled alive out of the water at 12.56pm local time (04:56 GMT) on Tuesday following reports on CCTV that three people had been confirmed alive inside the upturned ship.

Another man was later pulled alive from the water, the newspaper reported. The Yangtze River navigation administration said the ship was submerged and turned upside down after capsizing during a cyclone at Jianli in Hubei province.  Seven people swam to the shore and alerted police after the shipwreck, CCTV reported.