Home News Feed I Did Not At Any Point In Time Steal $20bn Or $18.5bn...
Facebook
Twitter
WhatsApp

Diezani Alison-Madueke, a former minister, has addressed almost all of the questions that had been begging for answers for years in a grand interview to This Day. 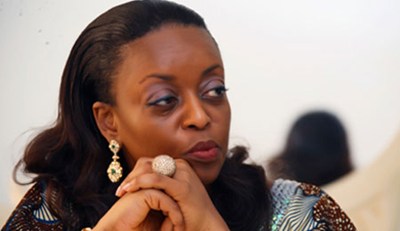 The excerpts of a two-hour long talk were published on June 7, 2015, Sunday, while the actual date of the talk has not been provided.

Among the topics she mentioned were: accomplishments and the structural problems of the petroleum sector, the $20 billion controversy and Emir Sanusi II, the PwC forensic audit, the efforts to end the fuel subsidy regime and privatise the refineries, her stand off with the National Assembly, her current absence from the country, and many more.

Naij.com brings you five most important blocks of the interview (questions and answers):

Q: So what exactly is the nature of your illness; is it true that it is cancerous in nature?

A: That is a private matter that should not concern the public.

Please do not say I stole $20 billion or $18.5 billion because I did not at any point in time. And if NNPC misappropriated funds or so, they have the entire explanation and more forensic audit should be done to determine how and why. But people should not make damaging accusations which have nothing to do with an individual. At no point did I steal from the Nigerian state.

In fact, the first mantra I had from the time I came in was that I will never touch anything that has to do with the Federation Account and I never did and I will take that to my grave. So I will suggest that this issue of $20 billion or $18 billion be dropped because that is the major problem I had with my job. I was accused of unsavoury things, but which were actually accusations against NNPC and the audit was deployed to clarify all these things. So let us deal with the issues. I have never gone around accusing people of doing this or that, I have always stuck with the issues even when I was the most abused minister, I was professional, I stuck to the issues and responded only to the issues.

Q: Emir Sanusi in a recent interview with the Financial Times after the release of the full PwC report brought up another figure of yet another $18.5 billion that is unaccounted for with reference to the kerosene subsidy issue. Kerosene subsidy has always remained controversial and yet the product is not available to Nigerians at the official price till now. What is it that can be done to stop the scam in this area?

A: Well, like I said before, it has to be deregulated. Take away the subsidy and let the market parameters of supply and demand come into play whether it is DPK or household kerosene. I think until that happens, we are not going to achieve a clear landing where kerosene is concerned. Secondly, we still have to come back to the fact that we must get our security agencies to assist us in terms of vandalism and sabotage. I know it is difficult.

I know the problem that they have as well and there is also the problem of funding. But you know we have product pipelines that transverse the majority of the country, but we can’t use them because great tranches are sabotaged or vandalised either all of the time or some of the time. What happens is that we still have to truck products from one part of Nigeria to another part of Nigeria, which is why the Petroleum Equalisation Fund still exists because it still has to pay bridging costs and we have transporters now having to add the cost of moving those products from one part of the country to another, which again causes the disparity in the cost of these products. And again, you have people who engage in unwholesome business practices and sell these products at higher prices than the official price. So I would say once more that we need to remove the subsidy on DPK, just as we need to remove the subsidy on PMS as well, which was why I pushed for complete deregulation on January 1, 2012. And I will say it again, Nigerians have to be prepared to go through a little period maybe of discomfort. But the market forces of demand and supply means that as some point there would be some sort of balance or equilibrium in terms of the cost viz-a-viz the supply. I think that is the only way we can get rid of the kind of corruption and scam in that area.

Q: But Sanusi accused you of sustaining the subsidy despite the directive by the late President Umaru Yar’Adua that the subsidy on kerosene be stopped and he said that had you obeyed that directive, the alleged amount of unaccounted money, would not be missing?

A: Let me just make this very clear to Nigeria as a whole because this is an area of great pain for me. That Sanusi should say I sustained the subsidy is not true, when very clearly in 2009, the late President Yar’Adua gave a written directive to the late Minister of Petroleum Resources Alhaji Rilwan Lukman that he should remove the subsidy on DPK.

This subsidy on DPK was never removed by the late Minister of Petroleum Resources, whom I considered to be somebody that I regarded almost as a mentor. For reasons best known to late Alhaji Rilwan Lukman and the then economic team, the Finance Minister and others, they never implemented the directive to remove the subsidy. By law and the Petroleum Act, you must gazette such a removal for it to become law and of course it has to be published so that Nigerians would know that there has been a change in the price of the petroleum product. It is illegal to do it or to say you have done it, if you have not gazetted it.

Even before that, former President Goodluck Jonathan who was the vice-president at that time, had also clarified, even in a public media broadcast and in person as well, that the subsidy was never removed. So I sought clarification from him and he also made the clarification clear in a public media broadcast about a year and a half ago, that the subsidy was never removed. So at no time did I go against a president’s directive. It is not possible that I would have come in as a Minister of Petroleum in 2010 and found that kerosene subsidy no longer existed and that it had been gazetted and I would have suddenly upturned it. Government is a continuum and so it was not possible that I could have done that. So I feel very pained that Sanusi would make it sound like I was the one who went against late President Yar’Adua’s directive. I think this should clarify this issue once and for all.

Q: On the PwC forensic audit, why did it take so long for you to make it public, or why was it that you had to wait for so much pressure to be applied, to the extent that President Muhammadu Buhari had to say there would be another audit of NNPC, which forced the government to release the full PwC report?

I am not really in a position to answer that simply because the PwC forensic audit was put in place by the Auditor-General of the Federation and not by me. So the full deployment of the forensic report was not under my purview at all. We saw the summary just as everybody else saw the summary and at some point, we had to request the full details to be able to look at it as well. So the timing of the release of the audit had nothing to do with the Minister of Petroleum Resources. But we felt all along that the full report should have been released from the get go, so that Nigerians would have an opportunity to look at it. I had said from the beginning that at any point in time, the NNPC should be absolutely open for audit of any type. In fact, that is necessary and so I am not sure whether or not the PwC report coming out at the time it did or not coming out earlier on, has anything to do with any other forensic audit that may be done. I think that other forensic audits have to be done on the NNPC.

5. About privatisation of refineries

Let me also add that even in terms of the refineries and refined products for Nigeria which has been a major problem for us over the years in terms of the optimisation of our refining capacity and the run down state in which we found the refineries when we came in between 2010 and 2011. When we looked at the situation and digested it in every possible manner, it was found that just like the power sector, government has no business being in major areas of infrastructure such as refineries. It is inefficient for government to be there.

So while government should in fact hold a certain percentage, in terms of its ownership structure so that it has a stake in the refineries, these refineries should be opened up to private sector entrepreneurs who can take them and run with them, and create them into models of private sector efficiency for the benefit of the nation in terms of refined products deployment in the short, medium and long-term. Accordingly, we moved in 2013, prepared the framework for the privatisation of the refineries to ensure that indigenous players could come in and turnaround our refineries, recreate them and begin to give us the needed distribution and supply of products. With the president’s approval, we moved on this aggressively. Unfortunately, as we tried to deploy it, there was a major push back again, this time from the unions, who were completely against the privatisation of our refineries and as you can see, over the last one-and-a-half years, it has been difficult to optimise the usage of the refineries because the funding to invest in them from the government side is just not there. And unfortunately, we have seen over the last one year, a drop in the price of crude oil by almost 50 per cent, which means that our funding level has almost been depleted.