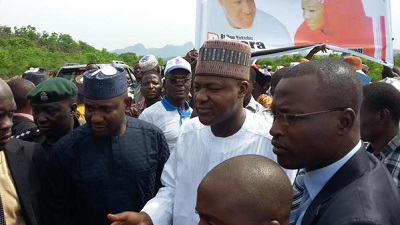 Speaker of the House of Representatives, Hon Yakubu Dogara, at the weekend, arrived Bauchi his home state to a grand reception by supporters, admirers and members of the All Progressives Congress (APC).

Dogara, who was visiting Bauchi State for the first time since his emergence as Speaker of the House of Representatives, promised that the green chamber would move a motion for an international donor agencies conference that would fast track development for the North-East region, which has been almost brought down to its knees by Boko Haram.

He also said his emergence as Speaker would not have been possible without the support of his colleagues and the people of Bauchi State, who made sacrifices to ensure his victory.

“I owe them a debt of gratitude. I also owe religious and traditional leaders who wished me well. Some of them fasted and prayed for my success. I promise to reciprocate the kind gesture they showed to me”, he said.

The Speaker noted that the APC came into power when things were difficult in the nation, pointing out that the problems were inherited and not created.

“When I came home, most of the workers were raising issues about outstanding workers’ salary. As I came into office, that was the first issue I addressed and today, one month salary has been paid to workers”, Mr. Dogara pointed out.

In his response, the state governor, Mohammed Abubakar said that the just concluded 2015 election in the state came with a lot of challenges, claiming that a Boko Haram unit was created to scuttle the election.