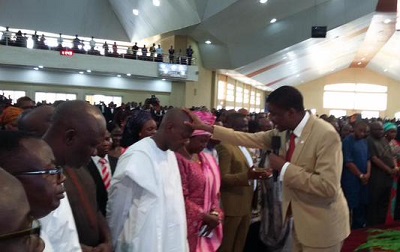 Speaker of the House of Representatives, Rt. Hon. Yakubu Dogara, has stated that if not for divine intervention, he would not have been elected speaker last week.

Speaking during a Thanksgiving service at the Living Faith Church Goshen City, Karu Nasarawa State, on Sunday, Mr. Dogara said the teachings he has been receiving in the Church in the last 27 years, aided his victory.

“I have been a member of this church since 1988 even before I went to the University. The teachings I receive here have defined my life

“If it were not for the teachings we receive on this altar, maybe this victory may not have come.

“We had Goliaths in the run up to the election; there were Tobias and Sambalats. We had Balams who were asked to curse us but God is with us”, he said.

Mr. Dogara said the end of the matter is better than the beginning

“It was Machiavelli who said you should not conquer territories you cannot keep. We have to keep this through prayers”, he said.

He also said the new government in Nigeria is coming into power at a time of global crisis, “the economy is bad, there is collapse of government and the rise of evil to power in different parts of the world. Even family values are being redefined.

“We plead for your prayers because we must confront these challenges. As leaders we are responsible for what we allow. We need your prayers”, he said.

Also speaking, presiding at Goshen City, David Abioye, described the new Speaker as a true ambassador of the church saying “when the righteous reign, the people rejoice”.

“House members have been sharing testimonies of your good works and we pray that God will sustain you and keep you strong”, Mr. Abioye said.