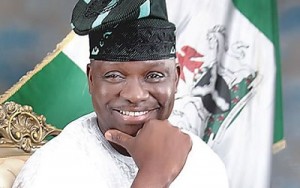 Ekiti State Governor Ayodele Fayose yesterday boasted that he was a one man army who cannot be overwhelmed by the outgoing legislators of the All Progressives Congress (APC) in the State House of Assembly.

Fayose, who spoke while receiving national officers of the PDP in his office, insisted he was firmly on ground even as he warned that the country must not be turned into a one party state.

The assertions came amid reports of the abortion of the planned movement into the state by the 19 APC legislators yesterday.

The buses conveying the legislators were turned back at the Igbara Oke boundary between Ondo and Ekiti States yesterday, according to reports.

Welcoming the PDP national leaders to the state, Fayose said the people of the state, who voted him as their governor on June 21, 2014 are solidly behind him.

Acting national chairman of the party, Prince Uche Secondus, while speaking earlier, denied ever appealing to the 19 APC lawmakers not to impeach the governor.
He said the PDP only advised the lawmakers to follow due process and the rule of law in their engagements towards the governor.

Fayose is expected to inaugurate the State’s new House of Assembly on Friday. All seats in the House are occupied by the PDP.