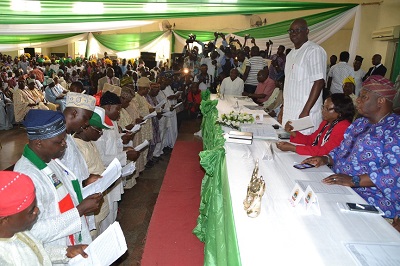 Governor Ayodele Fayose of Ekiti State on Tuesday swore in new caretaker chairmen in the 16 council areas in the state, with a call on them to replicate his ‘Stomach infrastructure’ programme at the grass roots.

The state House of Assembly had last Friday approved Fayose’s request to dissolve the councils and reconstitute them after six months, as stipulated by the Constitution.

Represented by his Deputy, Dr. Kolapo Olusola, the governor charged the caretaker chairmen to bring their experiences to bear in the running of the LGs in order to hasten rapid development at the grass roots.

He said, “You are appointed based on your proven integrity, both in private and public offices. I want you to bring your experience to bear in the service of the people by engineering rapid transformation and development at the grass roots. Nothing than the best is expected of you. It is hoped that you will not disappoint the state”.

Fayose also urged the council bosses to be diligent and transparent in the conduct of their functions.

“I appeal to you to be submissive to the governor. It is only a leader that follows well that can lead well. The Stomach infrastructure is the baby of the governor and should be replicated and implemented in the local governments”.

Virtually all the caretaker chairmen were returned with the exception of the former chairman of Oye Local Government Area, who was replaced with Mr Oluwole Paul.

In the acceptance speech, the Caretaker Chairman, Irepodun/Ifelodun Local Government, Sunday Olowoyo, who spoke on behalf of the others, assured the governor that they will not disappoint the people of the state.

Mr. Olowoyo promised that they will justify the confidence reposed in them.