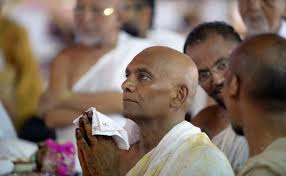 Known as the “plastics king” of Delhi, Doshi gave up his 600-crore business empire to become the 108th disciple of Jain guru Shri Gunratna Surishwarji Maharaj. Jain lectures had been drawing him to spirituality since 1982, but his family – his wife, two sons, and a daughter – were always reluctant to let him go.

They finally gave in last year, allowing Doshi to fulfill his long-time dream of becoming a monk. His initiation into monkhood took place in an extravagant ceremony at Ahmedabad Education Society, in Ahmedabad, Gujarat.

Doshi, who is originally from Rajasthan, refused to join his father’s textile business in the 1970s. Instead, he borrowed 30,000 rupees from his father to start his own plastic trading business in Delhi. After four decades of growth, success, and a luxurious lifestyle, Doshi has given it all up for a life of austerity.

He must wear simple clothing, walk barefoot, and must never again cut his hair. “Taking diksha is not easy,” said Surishwarji Maharaj. “A Jain muni’s life is like that of a conch shell that cannot be painted by any other color.” But Doshi remains undeterred by the hardships that await him.