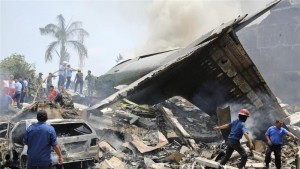 At least 113 people have been killed after an Indonesian air force C-130 plane crashed in a residential neighbourhood in the city of Medan on the northern island of Sumatra, according to military officials. Aljazeera reports:

The plane came down on Tuesday hitting empty residential buildings after bursting into flames shortly after take off. There were 12 crew members and 101 passengers on board the plane, the AFP news agency reported, citing officials who spoke to local television.

The Hercules transport plane was on its way from an air force base in Medan to Tanjung Pinang in Sumatra.  Al Jazeera’s Stefanie Dekker said the dead included civilian relatives of military personnel. “This was a C-130 military aircraft on a routine trip, carrying soldiers and their families,” she said.

“The pilot radioed in, saying there was an issue with the plane…he tried to turn back and then the plane went down over Medan. The plane went down in a populated area, hitting two empty buildings. That number could have been much higher.” The Indonesian military has now opened an official investigation to try and figure out what went wrong.