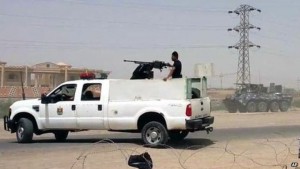 Not less than 45 Iraqi police officers have been killed in an attack by Islamic State (IS) militants in Anbar province, security officials say. Suicide bombers rammed three vehicles packed with explosives into a base in the Tharthar area, on a road connecting the cities of Falluja and Samarra. BBC was there:

Several high-ranking officers were among the casualties, one source said. Anbar has been the scene of fierce fighting between pro-government forces and IS militants in recent weeks. A volunteer force of mostly Iranian-backed Shia militias has launched an operation to regain control of the provincial capital, Ramadi, which fell to IS last month.

A security source in the Anbar Operations Command told the BBC that three explosives-laden armoured Humvees captured by IS were used in Monday’s attack on the headquarters of the 3rd Battalion of the Iraqi Federal Police’s 21st Brigade.