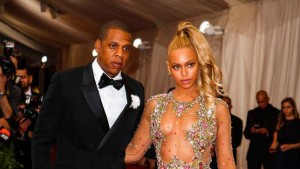 Superstar American singer, Beyonce, 33, and her millionaire husband, Jay Z, 45; might be on the road to giving their 3-year-old daughter, Blue Ivy another sibling.

According to In Touch magazine, the music couple have enlisted the help of a surrogate for their second child after a three-year struggling.

An insider told the outlet that Bey & Jay ”are in the process of having a baby through a surrogate.” Adding that, ”they were trying for several months, but Beyoncé was having trouble. She was scared about another high-risk pregnancy, so surrogacy became the best decision for them.

”They didn’t want to take any more risks, so after all the ironclad legal documents were drawn up, it took them about two months to find the perfect woman to carry their child. The surrogate is still in the early stages of the pregnancy, so they have yet to announce it to the public,” the insider tells the magazine.

Do you think Kim Kardashian’s second pregnancy inspired Beyonce to go for a second try?