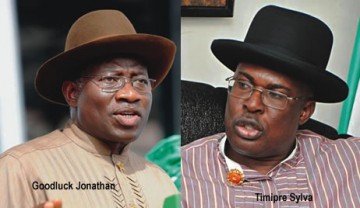 The ex-governor insisted that Jonathan’s attempts to scuttle the election disqualified him from benefiting from such heroic status.

Sylva, who fell out with the former president after his second term ambition was scuttled by his then party, Peoples Democratic Party, allegedly as a result of pressure from the Presidency, said though the decision to concede defeat was inevitable and would have been suicidal for Mr. Jonathan, the heroic status is a clear show of lack of value and indication of how cheap a man could earn such status in Nigeria.

The former governor, who is now a chieftain of the All Progressives Congress, APC, spoke in an interview in Yenagoa, the Bayelsa capital.

He said, “For me, conceding defeat is not an achievement. Let us take a look at the event they tried everything to subvert and thwart. They tried to go to court to stop the announcement of the result. Former Minister, (Godsday) Orubebe, tried to stage a coup during the announcement to allow some paid ex-militants to invade the venue. They asked the former Inspector-General of Police to withdraw security from the venue to allow ex-militants invade the venue. When all else failed, what did you expect him to do?

“If the Super Eagles play a football match and were defeated. They now accepted defeat. Is that an achievement? Seriously, if this is the level where Nigeria has descended to, it is a sorry state. We cannot be praising somebody for losing in such manner.

“He (Jonathan) didn’t have any other choice. What would he have done? To kill himself? Any other thing for Jonathan to do in Aso Rock would have been suicide or self-destruction. At that point Jonathan also knew it.

“What he should be saying is that at that point, he did not self-destruct. So he is now a hero? If one can be a hero so cheaply in Nigeria, then it is sad. For the APC, what we considered was that there is no need to rub the defeat in. The man is down and we decided to humour him out of office”.