Kenya Issues Bounty For The Capture Of German Al-Shabab Fighter 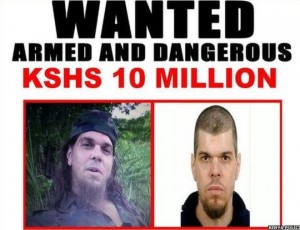 Kenyan police have issued a $100,000 (£64,000) reward for the capture of a German national accused of taking part in an al-Shabab attack on Sunday. Andreas Martin Muller, who has the alias Abu Nusaybah, is alleged to be one of the gunmen who attacked a military base in Lamu county. BBC has more:

Eleven al-Shabab fighters and two Kenyan soldiers were killed. Another foreigner, Briton Thomas Evans, also took part in Sunday’s assault andwas killed in the fighting. Sunday’s attack is part of a growing number of assaults in Kenya carried out by the Somalia-based Islamist al-Shabab group. Al-Shabab fighters killed 148 people in an attack on Kenya’s Garissa University College in April.

The reward is part of a police campaign known in Kiswahili as Kaa Chonjo Usinyamaze (“Be alert, Don’t Keep Quiet”), which was launched to combat the threat from the jihadists.

In April $20,000 was offered for information that would lead to the arrest of two al-Shabab fighters suspected of being involved in the Garissa attack, but it is not clear if the police have any useful intelligence on their whereabouts, the BBC’s Ruth Nesoba reports from Nairobi.