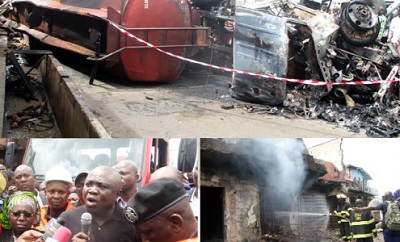 The meeting, Mr. Ambode said, would address the incessant petrol tanker-induced fires in the state.

The governor gave the directive on Saturday during a visit to the scene of the early morning petrol tanker fire at Idimu area of the state.

A similar tanker fire occurred on Tuesday at Iyana-Ipaja area of the state which left several shops and vehicles destroyed.

The Idimu fire which occurred in the wee hours of Saturday at an intersection has also left property worth millions of naira in ruins.

About 34 buildings, 70 shops, one tricycle and one truck were consumed by the fire ignited by a fallen petrol-laden tanker, according to the Lagos State Emergency Management Agency (LASEMA).

“I have directed that we will meet with the union of the tanker drivers and other agencies on Monday morning, and we must make pronouncements relating to the usage of our roads.

“This is another unfortunate accident within one week; unfortunate because we are beginning to lose a lot of our assets and property”, Mr. Ambode said.

Mr. Ambode also said it had become necessary to check the activities of the tanker drivers and enforce the state traffic laws.

“We do not want this to repeat itself again. I have been briefed that there were two tanker drivers actually competing on the road as at midnight including a commercial bus.

“In the process, one of the tanker drivers conveying 33,000 litres of fuel lost control at the bend and spilled its content to as far as five streets”.

He said 34 houses and 70 shops were destroyed by the fire.

Mr. Ambode also commiserated with those affected by the fire and appealed to them to remain calm.

“We will do immediate relief and take enumeration to see how we can address this issue.

“We will do everything in our might to make sure that they go back to their normal lives”, he said.

Giving an account of how the incident occurred, the Director of the Lagos State Fire Service, Rasak Fadipe, said his men responded to the distress call at about 12.08 a.m. on Saturday.

“The prompt response by the rescue officers with the aid of the community helped to prevent the fire from spreading.

“The effort we put in saved the MRS fuel station from being engulfed by the fire and we also saved several buildings here”, he said.

He said the incident also consumed fire- fighting materials that would have been used to contain about 15 to 20 future fire outbreaks.

“As the governor said, something has to be done about this type of incidents”.

Also speaking, Babatunde Kokumo, the Deputy Commissioner of Police, Operations, pledged the support of the Police in addressing the situation.

“We want to see that‎ sanity returns to our roads, particularly sanity among our tanker drivers, tipper drivers and generally among all users of roads in Lagos.

“The government is doing so much for us and we must as a matter of seriousness reciprocate all these gestures by ensuring that we instil sanity”, the DCP said. (NAN)