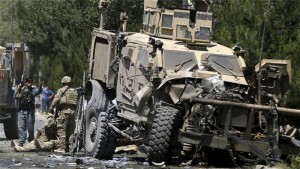 A powerful blast targeted at a NATO military convoy in Afghanistan’s capital Kabul, wounding 19 people, including women and children, officials said. The blast on Tuesday came on the main road to the airport, around 500m from the US embassy and near a base for foreign troops. Aljazeera was there:

NATO said none of its troops were killed or injured in the attack. “It was a suicide car bomber targeting a convoy of foreign forces in Kabul,” interior ministry spokesman Sediq Sediqqi said.

Kabul deputy police chief Sayed Gul Aga Rohani confirmed the attack and said there were casualties, but no further details were immediately available.Al Jazeera’s Jennifer Glasse, reporting from close to the scene of the explosion, said the “huge” bombing explosion was heard around the city.

“Police and the army are already on the scene keeping people away… We heard the blast from our office, about 1.5km away and saw a huge plume of smoke,” Glasse said, adding civilian cars had been caught up in the explosion. The blast came about a week after the Taliban staged an attack on the Afghan parliament in Kabul, killing at least five people.

Also on Tuesday, a suicide attack on the police headquarters of a southern province killed three people and wounded more than 50, including policemen, Afghan officials said