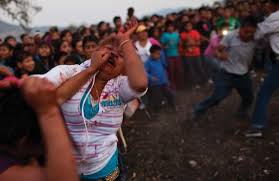 Every year, in the month of May, women from the Nahua villages of Guerrero, Mexico, get together to beat the living daylights out of each other in an ancient ritual that they believe will bring water to their land. Oddity Central has more:

The villagers stand in a circle, forming a ring of sorts, waiting for their adversaries to arrive from neighboring communities. The villages of La Esperanza and El Rancho Las Lomas, in particular, have a long standing rivalry – they fight in a field that lies on the border between the two towns. When everyone has arrived, the women begin to seek out opponents, challenging them to fights. The older women, who are seasoned warriors, provoke younger girls to get into the ring and spill some blood.

Once the opponents are decided, the women get into the ring and face each other, tying up their hair and taking off their jewelry. One of them throws the first punch, the crowd begins to cheer, and pretty soon, a bloody fight is underway.

The women don’t seem to care about winning, all they want is to spill as much blood as possible. They might ask for a time out to clean up their bloodied noses, but they’ll get right on with the punching once they’re done. Men and children sometimes join in as well, and the fighting continues until dark, after which everyone hugs each other and heads back home.