Deolu
A 29-year-old man, Kanayo Awurum, has been arrested by the Lagos State Police Command for allegedly selling his son for N450,000 in the Egbe, Ikotun area of the state.
According to Punch, Kanayo, from the Ikeduru Local Government Area of Imo State, allegedly sold the two-year-old boy, identified as Samuel, to some middle-aged women. 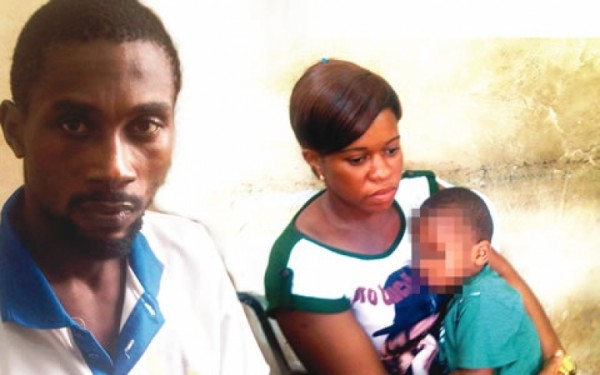 It was learnt that the police had apprehended the three women ─ Nkechi Obi, Cecilia Nwatu and Gladys Nwobodo ─ for allegedly buying the child.
Our correspondent learnt that,the women, who were working with Kanayo’s friend, identified only as Emmanuel, had visited the man and his wife to purchase the boy.
It was gathered that Kanayo told Emmanuel, who is still at large, that he had some financial difficulties, and decided to sell his son for N450,000.
Speaking with PUNCH Metro, Kanayo said..

“I met Kelechi in our secondary school days in 2005. It was in 2010 that we started living together. In December 2012, shegave birth to Samuel. We were then living in Owerri, Imo State. I was working as a painter and also acted in movies. I was an upcoming actor so I was not well paid.
“From 2014, I started to have financial difficulties, and I wanted to come to Lagos to hustle. The idea to sell my child came in March 2015 when I finally decided to travel to Lagos. It was a friend, Emmanuel, who linked me to the women. I asked him to lend some money to me and he said I should use what I had to get what I wanted.
“I did not tell my wife that I wanted to sell our child. I lied to her that one of the women who came was my elder sister in Port Harcourt and our son was going to stay with her. My wife did not like the idea, but I convinced her that it was for our good.
“So, when we came to Lagos, we rented an apartment on Oluwaseyi Street in the Egbe area of Lagos. I was paid N450,000 for the boy. That was what I used to pay for the rent.”

Kelechi, 28, told our correspondent that it was when she pestered Kanayo to bring her child home for a visit andthe boy was not brought by the ‘relative’ that she suspected a foul play. 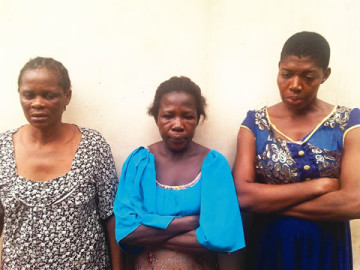 “Samuel was two years and two months old when Kanayo said he was taking him to stay with his sister in Port Harcourt. In April, he went to Owerri for a painting work and promised that his sister would bring Samuel on a visit.

“On the day he promised, no one showed up. He also failed to come back to Lagos when hepromised. I then told our landlord and one of his friends in Lagos, called Coach. Then, they agreed to trick my husband to come back home.
“When he arrived, they began to ask him questions and he later confessed that the boy was not actually with his relative. They went to report the matter at the Ikotun Police Division. That was how he was arrested.”

After the police arrested Kanayo, he was transferred to the State Special Anti-Robbery Squad.

Kanayo led SARS operatives to one of the suspected buyers, Obi, in Port Harcourt, where she was arrested.
The two other suspected buyers were later nabbed in the Agbani area of Enugu State where the baby was sold.Our correspondent gathered that Samuel was recovered by the police last week Friday, and he had been reunited with Kelechi.
Nwatu, 42, who took the child to her house in Enugu, said she planned to raise him as her child as her biological son was disabled. She added that she paid N650,000 for the boy.
She said,

“I am a mother of three. I have two girls and one boy, but my boy is deformed. He is about 10 years old. My husband did not know about it. I wanted a male child desperately to bear the family name. My boy has the Down syndrome. He could not talk.”