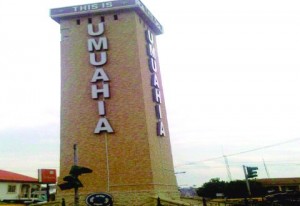 TRAGEDY struck, yesterday, at 12 Bonny Street, Umuahia, Abia State, as a 25 year-old man set himself and the family house ablaze. The man, Tochukwu Ogbonna, alias Mbe (meaning tortoise), had attacked his mother with a machete, inflicting severe injuries on her. Vanguard reports:

The woman is said to be lying critically ill at the Federal Medical Centre, Umuahia. Trouble started when the young man was said to have approached his mother on an undisclosed issue. He was said to have also attacked their domestic dogs, which he cut into pieces.

Vanguard learned that police were called in to arrest the deceased, but he was said to have escaped, set their house ablaze and threw himself into the fire. Some residents of the area said he was a drunk, while others described him as suffering a mental problem. The state Police Command confirmed the incident.