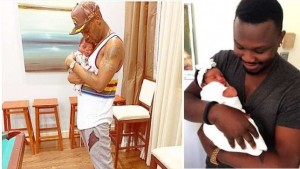 The new trend now is male Nigerian celebrities having babies with their wives and girlfriends.

In the last 6 weeks, 4 babies have been born to celebrity fathers, from Mavin Records singing sensation Dr. Sid to Nollywood heartthrob IK Ogbonna.

Below is a list of the latest daddies in town: –

Dr. Sid- The ‘Surulere‘ singer gave birth to his daughter on May 16, 2015. His little girl was born in the hospital of stars, Cedars-Sinai Medical Center in Los Angeles. The Mavin star has been wrapped up in baby duties. He shared a picture of him building his daughter’s nursery by himself. On June 4, 2015, he gave us a glimpse of his daughter in an emotional picture featuring his wife Simi Esiri who held their daughter intimately.

D’Prince – Dr. Sid isn’t the only new father in the Mavin household. Pop act D’Prince welcomed a baby boy on June 13, 2015. This delivery caught many by surprise because it was not known that the singer was expecting a child. His son was born in Atlanta, Georgia. Of course D’Prince’s Instagram has been littered with pictures of his son Uriel.

DJ Neptune – The high-profile DJ and lifelong Barcelona fan welcomed his baby girl on June 19, 2015. The former Storm Records/Naeto C was joyous when his wife delivered abroad. “And My blessing has arrived. Thank you God.. Thank you Wifey…. Boys are now MEN. Proud Father.. Proud Husband.. Perfect gift for#FathersDay God I give You all the glory” read his caption on Instagram the day she was born. On June 24, 2015 Neptune shared his first picture with her.

IK Ogbonna – The following day, June 20, 2015 the beautiful Sonia Morales who is IK Ogbonna’s girlfriend gave birth to their son. The couple will be getting married this weekend to seal their union.