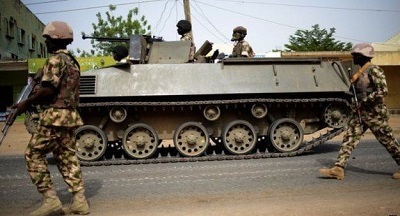 The use of a military approach to the persistent Boko Haram insurgency in the North-East geopolitical zone of Nigeria might not be the solution to the menace, a former Chief of Army Staff, Lt.-Gen. Alani Akinrinade (retd.), has said.

The former Army Chief made this known on Thursday in Kaduna as chairman of a seminar on the Africa’s Big Five.

The seminar has as its theme ‘Power and Influence in Africa’ and was organised by the Gusau Institute, a research library owned by immediate past Minister of Defence, Lt.-Gen. Mohammed Gusau (retd.) with interest in governance and security.

Akinrinade said as a former Army boss, he was not aware of any doctrine that could effectively tackle guerrilla warfare, which the Boko Haram insurgents have deployed in their attacks against Nigerians.

According to him, the military solution cannot end the Boko Haram attacks in the North-East.

He, however, noted that ending the Boko Haram insurgency lies with the politicians, economists and sympathizers of the crisis.

Akinrinade said, “Let me say a word or two again about Boko Haram. I have heard a lot of discussion about Boko Haram from many people. I must say that I am lost about the causes of Boko Haram, and I am sure most of our country men are also lost. I want to charge this institute to take this matter very seriously.

“So, I am aware that military solution is not going to be the end of Boko Haram.

“So, the ball is in the court of politicians, economists and those that have human sympathy that could bring solution to this crisis”.

Akinrinade added, “We have all agreed to treat constitutional issues and maintain federal character, but it has been bastardised with corruption that has taken over the Constitution.

“We fought the civil war to keep this country and we must honour our founding fathers because they bequeath a befitting country to us. We did what we did because the situation at that time dictated so”.

Akinrinade was a member of the Supreme Military Council during the military regimes of General Murtala Muhammed and Olusegun Obasanjo between 1975 and 1979. He became Chief of Army Staff in 1979.