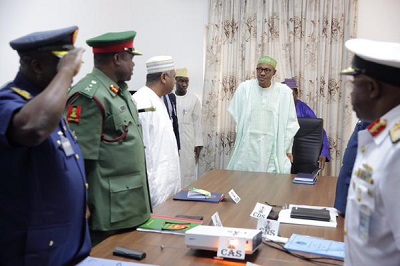 Service Chiefs on Tuesday spent over three hours briefing President Muhammadu Buhari on the security situation in the country.

The Chief of Naval Staff, Vice Admiral Usman Jibrin, made this known to newsmen in Abuja.

Jibrin told State House Correspondents after the closed door meeting, which held at the Defence House in Maitama that the meeting, the first with the president since his inauguration on May 29, was successful.

Jibrin said, “Since he was inaugurated as our Commander-in-chief this is the first time that we are formally meeting him to give general security briefing of the country, and that well very well, we have been able to provide insights into the security situation of Nigeria.

“The Boko haram issue, like I told you we have just given general briefing with respect to general security situation. Specifically on Boko Haram, with the level of successes being recorded, we want to maintain the tempo, and sustain until they are routed out”.

On when they will carry out the directive by President Buhari for the relocation of the command and control centre of the military to Maiduguri, Borno State he said, “The command center, we are the ones to go back and work on it. Soon it will be carried out, it is a Presidential directive, it must be carried out, and we must do that as quickly as possible.

“All Nigerians should continue to support the military and provide us with the needed intelligence, as to the human beings, their movements and suspicious movement should be reported to the police of course the police will make that available to us.

“You know as we continue to put pressure on them, in the Sambisa area, they will try to run away from there and then create further problems, using improvised explosives devices”.

On why the Boko Haram insurgents were becoming more daring, Jibrin said, “Like I told you, we are sustaining the tempo and the successes we have recorded so far. We want to continue to maintain that and if there is any suggested solutions that require amendments or alteration of what we’re doing, why not? Most especially the more they give us the intelligence, the better”.